Uncover the History of Mid Wales

​Perched high on a rock above the world-famous garden terraces, Powis Castle, originally built circa 1200, began life as the medieval fortress of the Welsh Princes of Powys, who held onto their kingdom despite the threats of their more powerful neighbours in Gwynedd and England.

In 1587, Powis Castle was sold to Sir Edward Herbert who created the romantic long gallery, which is richly decorated with the coats of arms of his ancestors. In 1784, the marriage of Lady Henrietta Herbert and Edward Clive, son of Robert Clive, the conqueror of India, combined the Powis and Clive estates.

Today, the medieval Castle contains one of the finest collections of paintings and furniture in Wales. It was originally built by Welsh Princes and was then the ancestral home of the Herberts and Clives.  The beautiful collection of treasures from India is displayed in the Clive Museum.

The Castle & Gardens have been remodelled and embellished over more than 400 years and reflect the changing needs and ambitions of the Herbert family - each generation adding to the magnificent collection of paintings, sculpture, furniture and tapestries.

In the early 20th Century, the 4th Earl of Powis and his wife, Lady Violet, redecorated much of the castle and brought the garden back to life, introducing new varieties from all over the world.

The world-famous garden, overhung with clipped yews, shelters rare and tender plants is laid out under the influence of Italian and French styles. It retains its original lead statues and an orangery on the terraces. 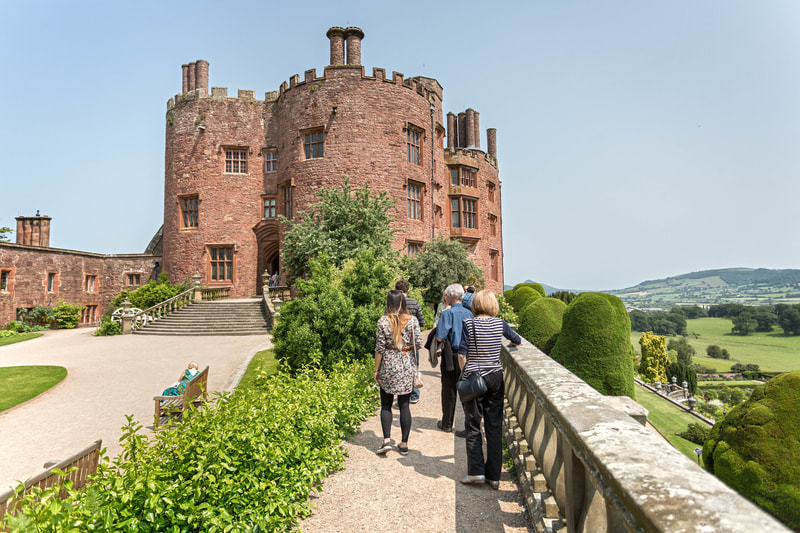 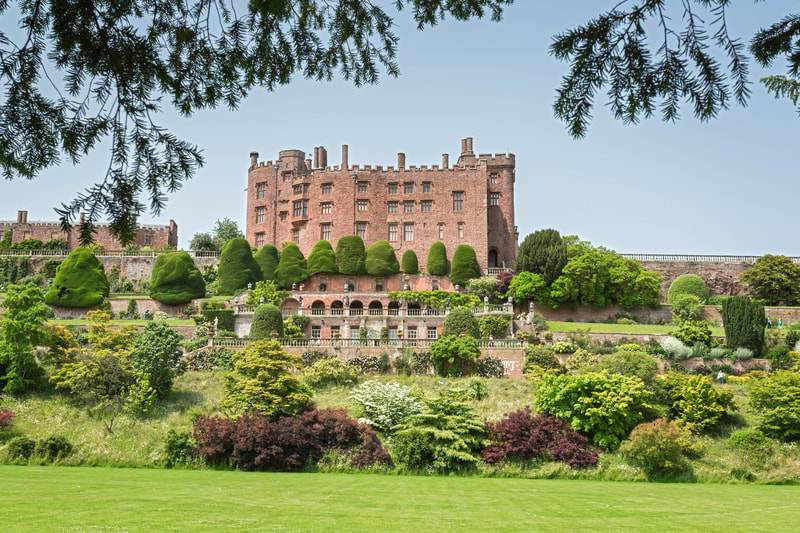 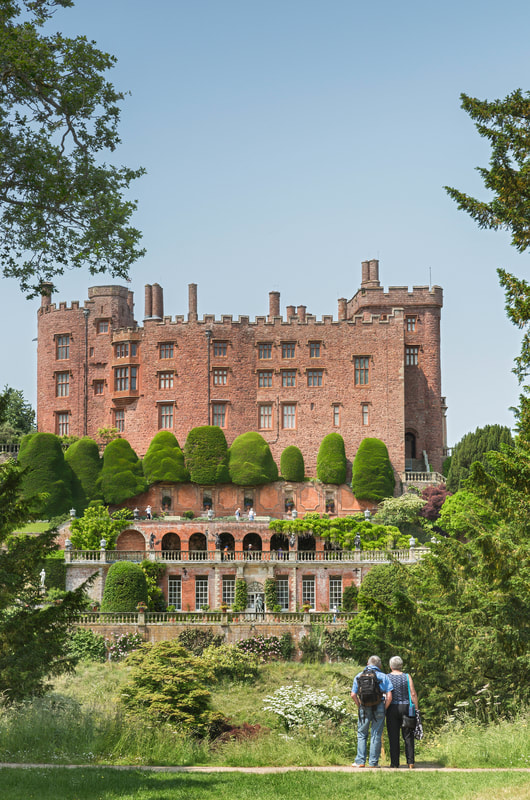 GREGYNOG HALL & LIBRARY
Gregynog Hall is an ancient house with a Victorian face. Once a landed estate, now a Conference Centre and Wedding & Events  Venue.

Gregynog Hall houses a magnificent library. Fine arts, literature, language, history and culture, rub shoulders with classic publications from the Gregynog Press. Many of the books once belonged to the Davies sisters; although the greater part of the general non-fiction collection has been acquired since the 1960s.

THE GREGYNOG  HALL GARDENS
The gardens at Gregynog are unrivaled, offering a mixture of formal and woodland walks. The Hall is surrounded by 750 acres of grounds containing many different landscapes including Grade 1 listed formal gardens. The Gardener’s Chronicle of 1912 described these as ‘highly artistic and in complete harmony with the natural surroundings’  CADW added ‘one of the most important parks and gardens in Powys, dating from at least 1500’

Early concrete fountains and bridges are surrounded by a mass of Rhododendrons and Azaleas. A magnificent clipped yew hedge and herbaceous borders create a spectacular backdrop to the Hall.

NATIONAL NATURE RESERVE
Gregynog has been designated a National Nature Reserve. The Estate attracts a diversity of bird life and in summer migrants share the bounty of the grounds with all three British Woodpeckers. The mouse-like Tree Creeper can be spotted among the Wellingtonia trees and in the undisturbed snows of winter we find Falcons and Sparrowhawks.

WOODLAND WALKS
There is a network of colour coded woodland walks, of varying lengths, which weave their way through the Estate and give tantalising views of both the Hall and Montgomeryshire countryside. A number of footpaths link through to neighbouring farmland for the more adventurous.

The Lily Lake Walk, Warren Walk, Great Wood Walk and Valley Walk have been created to offer something of interest to everyone.

Natural beech woodlands rise above ‘The Dingle’ and the water gardens of ‘The Dell’ display fantastic specimens of long established water marginals. The meandering Bechan Brook flows through the Estate attracting Kingfishers on its way to the Lily Pond.

Ancient Oaks, 300 years old or more, form the Great Wood, designated as a Site of Special Scientific Interest for it’s Lichen, whilst magnificent Cedar, Cypress and Copper Beech challenge those found in any Arboretum. The paths along the Wern bottom follow a beautiful shallow valley, with grazing horses, back through to the sunken lawns.

THE GREEN GYM
Gregynog’s woodland Trim Trail or ‘Green Gym’ is located in beautiful woodland opposite the hall and a short walk from the main car park.Ten pieces of equipment create a circuit through the woodlands; which can be extended for runners by joining one of the four waymarked walks. The ‘Wern Walk’ which passes by the ‘Green Gym’ is 5.6km in length.
See Website 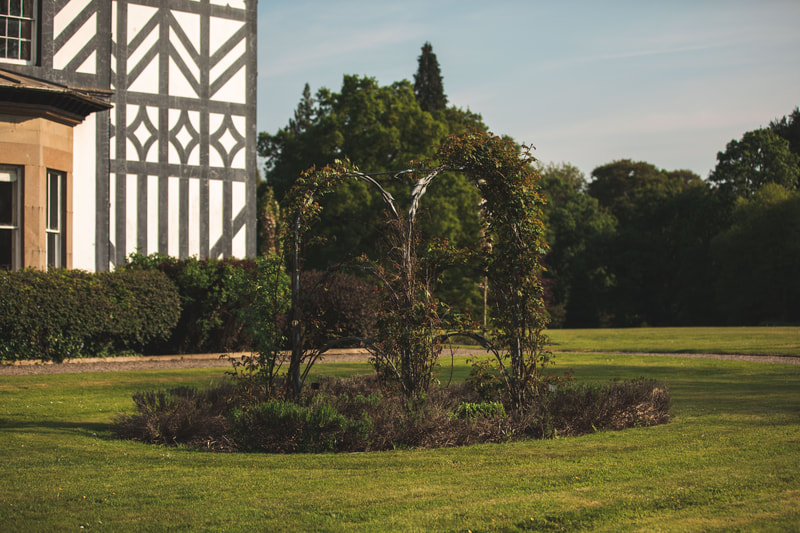 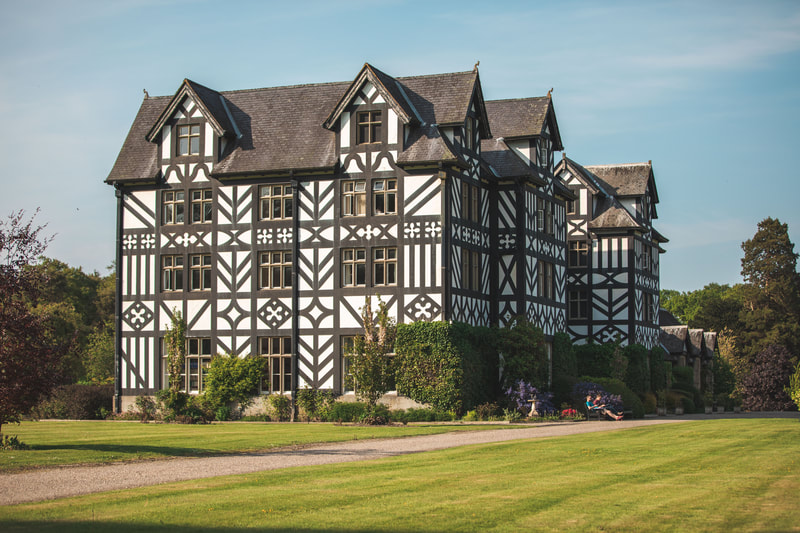 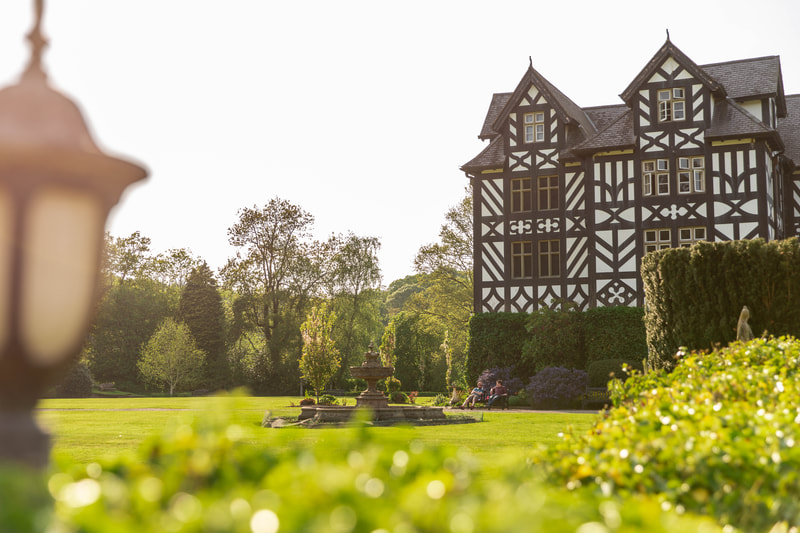 More than the sum of its parts
​
Montgomery is one of those castles that, even in ruin, retain a powerful atmosphere and presence that transcend its state of preservation. Perhaps it’s something to do with its location, on a steep crag above a pretty Georgian town with all-seeing views across the Welsh border. Commenced around 1223 on the orders of Henry III in response to the growing power of Welsh native prince Llywelyn ap Iorwerth (Llywelyn the Great), Montgomery’s stone castle replaced a nearby wooden fort known as Hen Domen. Perched on its rocky ridge, this new fortress was significantly sturdier and more sophisticated, with a stone inner ward, well, deep defensive ditches crossed by drawbridges and walled town.

The castle remained in use for centuries, surviving attacks by Llywelyn in 1228 and 1231 and Llywelyn’s son Dafydd in 1245. The castle’s ultimate end came during the Civil War, when it fell to the Parliamentarians and was demolished in 1649, leaving just the crumbling towers and low walls that stand today. 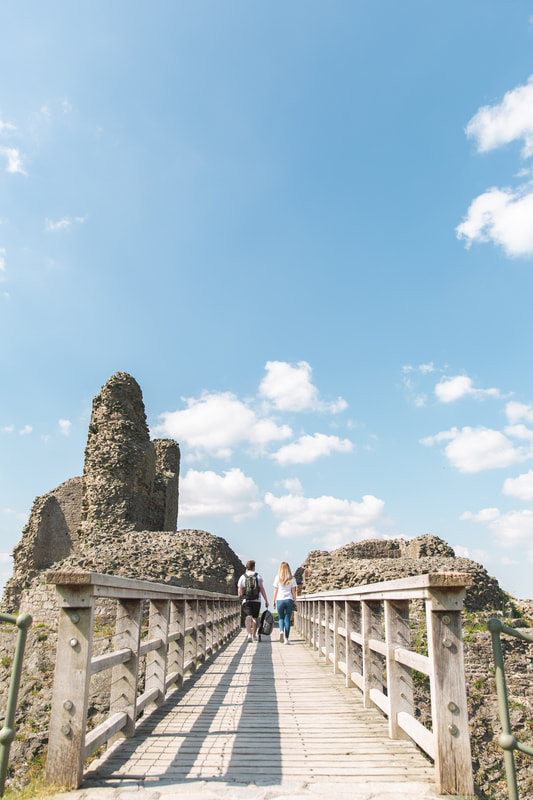 Built by Welsh lord Llywelyn ap Gruffydd (Llywelyn the Last) in 1273 on hill above the Severn Valley, Dolforwyn Castle was a flashpoint in Anglo-Welsh relations from the very beginning. When word reached King Edward I about the castle, he wrote to Llewelyn forbidding him to continue with the construction. Llewelyn responded that he did not need the king’s permission to build on his own land and carried on regardless.

Unfortunately, Llywelyn’s defiance was to be short-lived. Marcher lord Roger Mortimer took Dolforwyn in 1277 after a two-week siege. The castle was abandoned in the 14th century, falling into disrepair until comparatively recent excavations uncovered its crumbling remains.

The Textile Museum in Newtown - just over the bridge into Commercial Street, gives visitors a chance to see how the handloom weavers of the mid-19th century lived and worked.

The block which houses the Museum was built in the 1830s as a hand-loom weaving factory, the looms occupying the top two floors above three pairs of two storey back-to-back houses on the lower floors.

Newtown's development into a centre of industry is described through exhibits in the former cottages. On the top two floors the story of fleece to flannel is illustrated by looms and spinning wheels, alongside displays of related industries and influential local people such as Pryce Jones.

We also have exhibits of modern wool craft and demonstrations by experts in spinning, weaving and quilt making.

The Andrew Logan Museum of Sculpture was the first museum in Europe dedicated to a living artist. Andrew had always dreamed of opening a museum to share with the world his unique approach to life and art. He wanted the museum to be a vibrant space to display examples of work he had created over the decades and to stage events that would share his vision and skill for curating performance and spectacle.
​
This Artistic Adventure started when in 1988 Andrew & Michael Davis purchased a redundant space in Berriew, Mid Wales. In 1991 their dream became a reality when the Andrew Logan Museum of Sculpture (ALMoS) opened to the public. Designed by Michael, the conversion and building works were funded partially by themselves along with grant aid and donations from patrons.
See Website 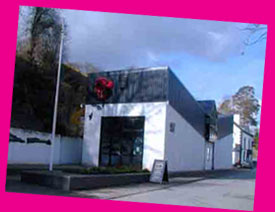 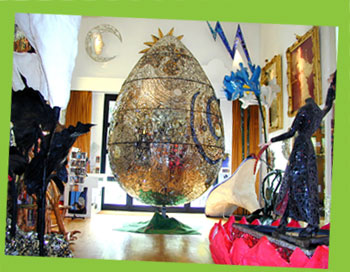 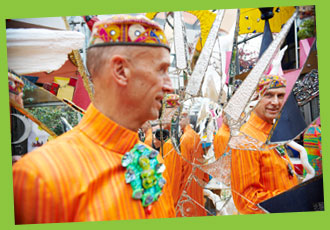 National Library Of Wales (45 Miles)
The National Library of Wales (Welsh: Llyfrgell Genedlaethol Cymru), Aberystwyth, is the national legal deposit library of Wales and is one of the Welsh Government sponsored bodies. It is the biggest library in Wales, holding over 6.5 million books and periodicals, and the largest collections of archives, portraits, maps and photographic images in Wales.

The Library is also home to the national collection of Welsh manuscripts, the National Screen and Sound Archive of Wales, and the most comprehensive collection of paintings and topographical prints in Wales.As the primary research library and archive in Wales[ and one of the largest research libraries in the United Kingdom, the National Library is a member of Research Libraries UK (RLUK)] and the Consortium of European Research Libraries (CERL)

At the very core of the National Library of Wales is the mission to collect and preserve materials related to Wales and Welsh life and those which can be utilised by the people of Wales for study and research. Welsh is the Library's main medium of communication but it does, however, aim to deliver all public services in Welsh and English. In January 2015 the Library in partnership with Wikimedia UK appointed a full-time Wikipedian in Residence with the aim of developing further its resources on an open license, to a world-wide audience.

Free exhibitions are held throughout the year in the exhibition galleries.

PEN DINAS CAFE
Pen Dinas Cafe is situated on the ground floor at the south-west corner of the library. The cafe offers a wide selection of light meals, sandwiches, paninis, salads, drinks and sweets, as well as hot meals and vegetarian dishes - Open Monday to Saturday.

GUIDED TOURS
An opportunity to have a tour of the building and see some notable treasures - weekly guided tours; pre-booking essential to avoid disappointment. Group tours also welcome with pre-booking. 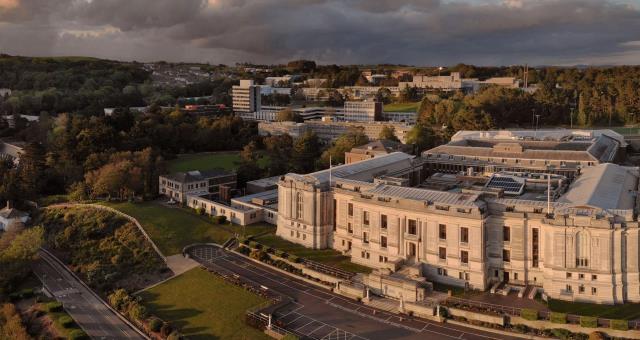 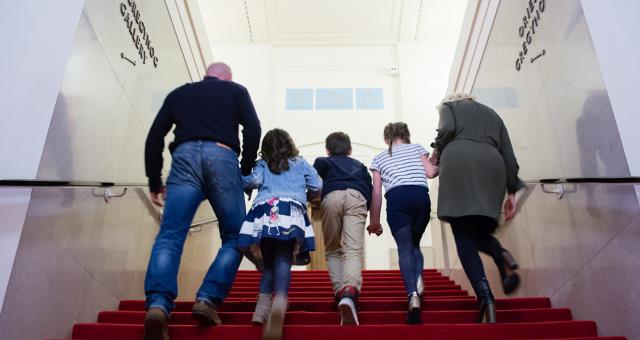 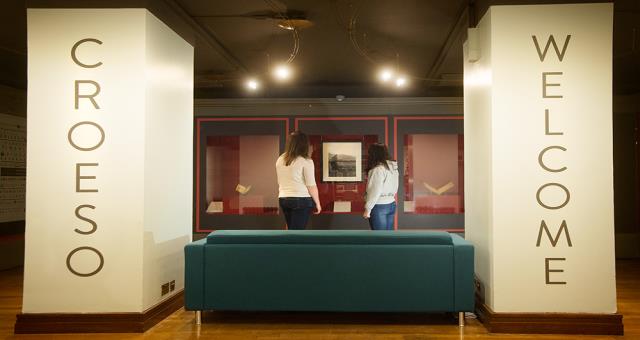